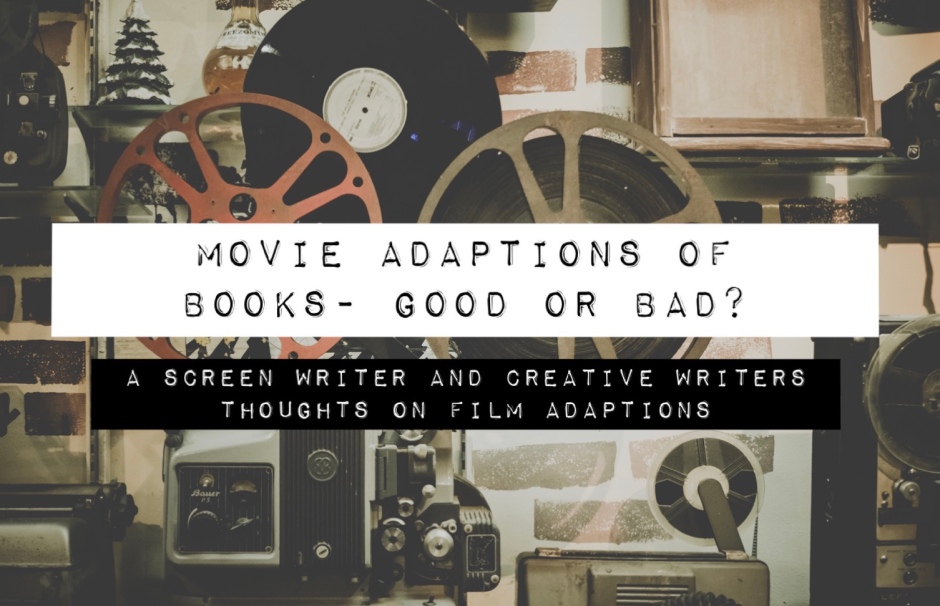 I was re-watching the Harry Potter series… again… the other day and couldn’t help but start to compare the films to the books, something I’m sure we’ve all done before. I was on the third movie, The Prisoner of Azkaban what is my favourite book to read in the series, but my least favourite film to watch. I just feel as if way too much important information got left out. This got me thinking about movie adaptions of books as a whole, are they something good or bad?

A common misconception is that I’m an English Literature student. Whist you many find me making myself at home in the odd English Lit lecture, it’s not my degree. My full degree is Creative and Professional Writing. I’m not studying the history of literature, I’m studying how to write in the creative and professional field, it’s quite a unique degree. I do your traditional creative writing, like how to write a book, alongside writing for the professional field, so non-fiction, journalism, game design and screenwriting. Yup, I’m learning how to write films.

I study how to write books and screenplays, this gives me a pretty unique stance on the film adaption of books debate as I work with both regularly. So, what do I think about film adaptions? Well, I have quite a few thoughts on the matter so lets dive right into it.

What is a film adaption?

Just so we’re all on the same page I do just want to quickly go over what a film adaption is, I know it sounds pretty basic but stick with me on this.

A film adaption is when written work is transferred in whole or in part to create a feature film. A key bit of information there is that the film can be fully based off the written work, or only partly based off the text. This is one of the reasons you’ll find a lot of films say they are ‘based off’ a novel. They don’t claim to be a direct copy, they state very clearly they’ve taken inspiration from it.

This has been going on a while

Like any good student I decided to put my head down and do some some research on the topic and I can say I was oddly surprised by what I found out. According to Reel Rundown it’s believed that one of the first film adaptions of a book was in 1896, that’s a while ago.

The book was called Trillby and came out in 1895, a year later Trilby and Little Billee was released. This 45 second scene is believed to be the first film adaption of a book. However, it is worth noting that all footage of this has been lost and there isn’t any record of who the cast or crew were. But even so, I was surprised that there was even the possibility of a film adaption in the 1890’s.

Why does Hollywood do it?

It’s less risky, it’s as simple as that.

Making a film is a pretty expensive task, there’s a lot of risk involved. It was estimated that the film Cats was set to lose one hundred million dollars because it flopped so badly, that’s a ridiculous about of money.

So, if you take a book series that is already successful there’s going to be far less risk of losing that kind of money, the audience is already sold on the film. The Harry Potter series has a dedicated fan base that will follow it to the big screen, the same with the Hunger Games and the same applies to Marvel with their comic books. The fans will follow and as a result it’s a whole lot less risky to make that film. It’s also worth noting that it’s pretty hard to make a blockbuster from something original, it’s not impossible but it’s a whole lot harder.

Sure, it’s less risky to put a well loved book on the big screen but that doesn’t mean things are going to be perfect. The draw back to having a dedicated fan base is that they have some pretty big expectations of that film and the directors are not going to live up to that.

Books are awesome because we create this world in our head, we imagine what the characters will look like, what the world looks like. It is impossible for directors to please every person’s expectations of the film. Take the Twilight series as an example (yes, sadly I have watched and read it… hours of my life I’ll never get back) there was a fair bit of negative discourse on Robert Patterson being cased as Edward. He didn’t fit the description of Edward and fans weren’t happy. He was a bad casting decision. This didn’t stop people from watching it, but it did leave a bad taste for some fans.

Then there’s the movie adaption that got on my nerves, Miss Peregrines Home For Peculiar Children. Just what were they thinking! When the book and film are analysed as individuals and not as a partnership, the individual item isn’t all that bad. I really enjoyed the book, and if I’d never read the book I think I may have enjoyed the film… the problem was that I’d read the book.

Just like Twilight there were some interesting casting choices, but that’s forgivable, the real issue for me was the plot. Characters were swapped, the plot was different, the climax was different to the book and after watching the film I was left thinking “What on earth have I just watched?” this was not the book I’d read a few months before, and here lies the problem with film adaptions of books.

The problem with film adaptions is that they have to adapt, hence the name film adaption. It’s not always possible to follow a book line for line, some things just don’t translate well to film. A scene might work perfectly in the book, but when it comes to the big screen it just feels wrong.

It’s pretty understandable why this happens. I’ve been asked loads if I would ever want to see my book on the big screen, is it a dream of mine to have my book as a film? The answer is no. Want to know why? It’s because I want to write a book NOT a screenplay.

A novel and a screen play are two very different things, trust me I know this, I’ve been able to write both of them at University. They’re structured differently, wrote differently. Yes, there are the fundamentals like the hero’s journey that the pair might share but they are not the same thing. It’s expected that things have to change to suite the medium the story is being told in.

A novel only has to consider the needs of one person when it’s being wrote, the author. A film has a whole lot more people involved, the cast, the crew, the animators and even down to the catering company and cleaners who work hard to keep people fed and happy. There may be restrictions that will never impact an author, one of the cast many not be comfortable performing a particular moment, the animators may not be able to achieve a certain look, the technology that’s available may not be good enough yet to do the world building justice. All of this can contribute to a film adaption of a book being a bit of a mess.

Let’s talk about the positives

However, not everything is doom and gloom. We’ve established that there are a fair few reasons a film adaption of a book may be a bad thing, but let’s talk positives for a second. Movie adaptions can be a really good way to introduce people to a new franchise and this can have some pretty cool domino effects.

Let’s take good old Harry Potter as an example. I was one of the people who watched it before I picked up the book. I didn’t watch them in order, one of my friends asked me to come to the cinema with her when the sixth film was released. I’d never read any of the books, nor had I seen any of the films, I just went along because I can’t say no to cinema popcorn. I had no idea what was going on or who any of the characters were, but I enjoyed it. After that I ended up borrowing the books off my step mum and reading the whole series.

I can say with confidence I’m not the only person who saw the films first and I won’t have been the only one who read the books afterwards. I’ve always been a lover of reading, so me picking up a book after seeing a film isn’t all that big of a deal, but what about the people who weren’t readers? You have to wonder how many people went from hating reading, to seeing the film, picking up the books and discovering that books weren’t that bad. How many people now love reading because of seeing the Harry Potter films and decided to give reading a chance because of it? The same goes for the Twilight series, I spotted this on Twitter and totally agree with it.

Yes the relationship dynamics of Twilight suck, yes it’s creepy and just ugh in general, but hats off to Stephenie Meyer for getting a generation into reading. Loads of young people would have watched the film and read the books afterwards and from that they would have stayed as book lovers.

This being said, as much as I moan about them, film adaptions are alright. On a lazy Sunday afternoon when I’m fancying a bit of Harry Potter I’m going to turn on the TV and watch it on that. I love reading but I’m not always up for using that much brain power. Also, I can’t read a book with anyone else, it’s not really a shared experience, but I can watch Harry Potter with them on the TV.

I love watching Alice in Wonderland, I prefer it over the book. But I sure won’t be going to the cinema to watch the Artemis Fowl film when that’s released, that’s strayed way too much from the lovable villain Artemis is.

Film adaptions are hit and miss, they’re neither good or bad. They are something we can all enjoy, we either enjoy watching them or enjoy moaning about them.

3 thoughts on “Movie adaptions of books – are they good or bad?”